No where have I found the question nor the answer.

And as such, I'm asking it.

As for the reason, perhaps its because it is really late at night (or early morning, if you will) and tomorrow looks to be a hopeful day. The government shutdown looks to be ending, there's a promise of really good seafood for brunch, a really crispy but potentially sunny morning, and so on.

There's been may opinions, as early as when the social networks started to provide immediate platforms of self-expression, of blogging's relevance. Some of these social-nets and micro-blogging sites have even faded in time and obscurity (as it were, now, irrelevant) but I've been on them all, well -- almost.
By the end of the year my most favorite of all which was well integrated into many of the things we all do in terms of search and services will, likewise, be gone. Farewell,
And so, what do we have left? A monoculture of Facebook with no other alternative seeing as they've taken over Instagram.

Don't get me wrong, I like FB and appreciate that (through its user-base) it still allows a small air-gap between IG. With the arrival of podcasting and the advent of vlogging, life getting busy, its definitely been easier to post photographs. After all, as they say, more words through visual.

However, there are times, such as now, that one can't help to just express one's thoughts past 104 characters. That perhaps a captive audience of your friends, family, and peers are not enough.
An opportunity to say, "Hello!" to posterity in writing just as I miss greeting my live audience during my short stint as a weekend radio broadcaster.

For the aforementioned free form ability to just be. To go it alone on a quick solitary jaunt around the corner and appreciate the simplicity of text.

Right then. That's it for now. Just as I said during my first post ... who knows? This could once again become a habit.

'Til the next time!

While I'm still sorting out what to do with the router all traffic will redirect here until further notice.
Posted by Jamz at 11:43 PM No comments:

I've recently been playing around with domains and self-hosting. Everything (almost) from this starter blog has been moved over but this will continue to stay up for now. All newer updates will be at:

Looking for some late deals? Shopping from that Christmas present? Already whipped-out your credit card? I've written a new post at the new blog on some pitfalls to avoid.

Cyber Monday deals are great for that gift you wanted but could not afford, for some it is one of the opportunities to get the stuff to fill their grand kid’s stockings come Christmas. With all the gadgets flying off the shelves right now I think its about time to pop the reminder of how things could historically go wrong and steps to avoid the pitfalls. Its never too late to educate.

This is a chime-in for the issue reported by LenFeldman sometime last April. I recently started modifying my blogs after some time-off and noticed that Google Analytics suddenly flat-lined after updating to a newer template/theme. It seems all the code got lost during the process. That means, like him, I've lost months of tracking reports :-(

I've put the codes back manually with help from eBlog and will be monitoring my sites this week. Hopefully everything goes back as well as the new site going live successfully.

So far I have been successful in exporting and importing my Blogger/Blogspot content to WordPress self-hosted. The nice thing to note is that this functionality is now built-in to WordPress and it will work after the initial authentication. After which I used the Category to Tags Coverter plugin which nicely sorted through the various import mismatch. Voila!
There is however one nasty issue. Although my newly converted Blogger-to-WordPress blog displays correctly in my internal network the view from the outside looking-in (external viewers) is largely flawed, to say the least. The WordPress themes, no matter what I change them to, are broken!
I found out the hard way and ticking off several theories.
1. Theme error?
I switched to the most basic theme and to my preferred ones, no game.
2. WordPress file and folder permissions?
Not sure what was up I re-installed several times and even updated to the latest 3.0.1 (which is another horror story altogether for another time). Still no juice, but that doesn't mean it isn't a particular file/folder permission setting.
3. Apache webserver and .htaccess rules?
I disabled, commented-out, deleted, created several .htaccess files in various folders but to no avail. It could be a general error under the main rules file that prevents serving images under the WordPress subfolder and yet why does it allow images on my phpBB and Joomla sites?
This is a mystery that needs to be solved and damn if I don't figure it out, soon.
For now I'm going through the official WordPress Codex notes on changing file permissions.
Update: 2010/November/22 @ 1:09AM

After ranting to my friends over dinner and swearing to move onto Joomla!, I simmered down and re-forwarded all my domains back to BlogSpot temporarily. After which I re-read the Codex and read through changing the site URL portion. The shortest path for me without messing with too many entries was to use the Relocate method, and it works. Eureka!

Here is how to do it:

1. Switch to editing mode (or followed the first 3 steps from my previous post)

3. Go to the end of the file and add the new temporary line:
define('RELOCATE',true);

4. Open your browser to your apparently-broken-to-external-wordpress-page and log-in:
ex. http://my-broken-wordpress-page.com/wordpress/wp-login.php

Since the RELOCATE flag set to true, your siteurl (General Settings -> WordPress address) will be auto-magically updated to whatever path you used to access the log-in screen. This will generally get the admin section functional but will not necessarily fix all the sections of your setup. You'll have to go through the rest of the blog and comb through the kinks if you find them. For now, my external viewers can now see this blog in its intended glory. Hooah!

Security tip:
Remove the added line once you get your site up and running. Leaving it there may break it (or leave your WordPress blog open to one).

So you're setting up various things like your WordPress or perhaps messing around with some internals based on tips you get across the web. You type them in then doesn't work and says you have invalid or the wrong user permissions. What gives?

Don't forget you are working on a semi-embedded environment and not all things follow what is on Apache spec all the time. So how do you find out more about your installation without having to be able to read all these script lines? Let the installed system work for you of course. Everything is working on the basic that means you just need to know what the settings are.

First things first, get your tools and be where you should:

Step #1: Download WinSCP (or if you're further advanced feel free to use ssh).

Step #2: Log-in to the NAS as admin
Using username "admin".
Step #3: Change directories to Qweb
[~] # cd /share/Qweb/
You are now at the root of your web server, you have the following options:

Newbie users like me will probably be stumped when faced with this ftp log-in screen when trying to update/upgrade/patch WordPress and/or plugins. You can attempt to guess and enter your details but there's a fair chance the whole process will fail midway through the next steps. Why? What to do?

Chris was quite helpful to get me on the right path. I have outlined the steps below for us QNAP users:

Step #1: Download WinSCP (or if you're further advanced feel free to use ssh).

Step #5: Exit the console
[/share/Qweb/wordpress] # exit
Step #6: Open your browser, get back to your WordPress admin console
http://(your-ip-address)
Step #7: Pour yourself a nice beverage

As soon as you're done, make sure to start updating everything. 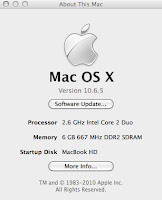 So the most recent update was released today and I waited a fair amount of time before taking the plunge -- approximately half a day. No, really, it just so happens I was poking around the news and found out about it. There was no official System Update notification at all. Strange? Nah, its Apple holding off for fixing feedback most probably.
Step #1. First things first was to run a Time Machine backup as instructed by the Knowledge Base (KB) article. That took about 30-minutes for me including connecting my external hard drive and backing up somewhere around 500-MB of data.
Step #2. Next was to say farewell to the world and update everyone about the attempt through the usual social media like Twitter and FaceBook -- this was of course easily done via a single post on Plurk. This is an optional step, but for those of you who only have one way to be online apart from your mobile device (ie. iPhone) it at least notifies everyone why you could be unreachable for a while. :-)
Step #3. Just to be sure in case the update would actually cause drivers to fail, I downloaded the standalone combo update package from Apple's Support Downloads site (approximately 977.21-MB).
Step #4. My wife was previously badgering me to try out FaceTime for Mac, so I did that too. Another optional step, but just in case the update includes an official release then why not?
Step #5. Finally, I clicked on Software Update ... This then asked for my Administrative password for system changes and proceeded to pre-update the initial components. It then logged-off the system and updated the core components (this flow prevents interruption by running applications). Once done, it did a system reboot.
I logged-in and everything seemed the same, except ....

Borked #1. GrowlMail bundle gets disabled. Those of you who use Growl for Mail.app simply have to download the unoffical update or follow the manual instructions from reaperhulk.
So far nothing else looks amiss, but these issues will slowly be teased out eventually and I will update this blog entry as I come across them. One of the most probable issues would be headers needed by MacPorts, but thats just in theory and for later.
Until then.